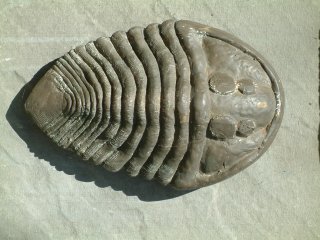 Realistic fossil sculpture made of resin and bronze by Nick Bartrum. It is located on the brick wall of 29 North Street, opposite the Hammer and Pincers.

In March 08 a young joy rider smashed a car into the wall, destroying the fossil as well as the wall and the car.

The fossil is currently being repaired. 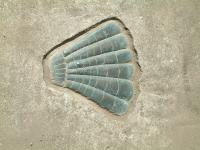 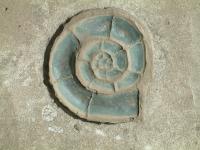 Embedded into the tarmac outside the library are six bronze sculptures of shells of various shapes. They were made by Emma Evans to represent the wide variety of fossilised shells that can be found. 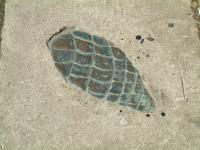 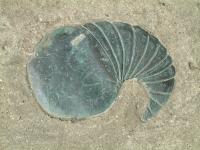 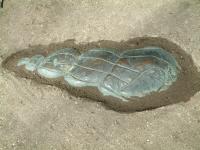 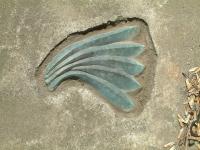 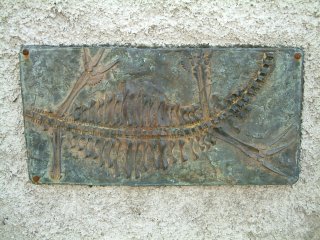 This bronze plaque was made by Jamie Frost and depicts the skeleton of some ancient reptile. It is a realistic sculpture and reminds us of newspaper photos of spectacular new finds

It is inset into the wall of Barrow's Methodist church in North Street. 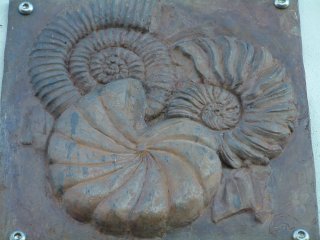 This fossil sculpture is a bronze plaque made by Conal McCabe. It represents the fossilised shells of three ammonites intertwined with each other.

It lies on the North east side wall of the Trap public house, along Breadcroft Lane. It is quite high up the wall. 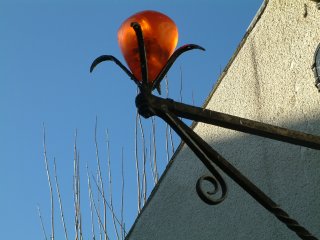 Attached to the Old Catholic Church is a "drop of amber" about the size of a football. It is mounted on a metal bracket to enable the orange drop to to be held aloft. If you look inside the drop very carefully you should be able to see the model of a fossilised dragonfly or other large insect. The amber is actullay clear resin and the insect is made of bronze. The whole sculpture is the work of Sara Spencer.

To get to this sculpture you go down Hollybush jitty from Bryan Close. The old Catholic Church is at the far end, just before Church Street. 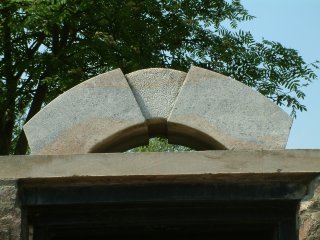 This door arch made in Ancaster weatherbed stone by Michael Thacker gives us a sense of the great strength of fossil skeletons. Does it represent a whole backbone? Or perhaps one vertebra. Whichever it is, it is an imaginative way of providing an arch over the side doorway into the Old Men's Hospital between Church Street and Beveridge Street. 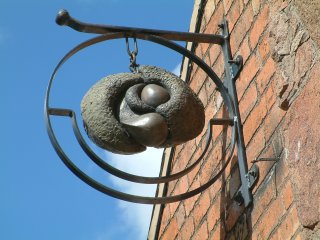 This abstract depiction of a curled up trilobite is the work of Sara Spence. It is suspended on a bracket high up on 35, Beveridge Street.

Trilobites were rather like modern woodlice although their closest living relative is actually the Horseshoe crab. They were bottom-livers, crawling, swimming or lying on the beds of shallow seas between 260 and 570 million years ago. Their hard outer casing enabled them to leave fossilised imprints. However, trilobites have not been found in Barrow. 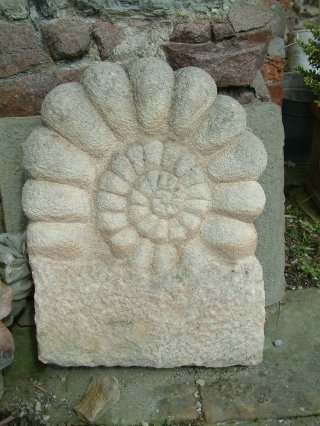 Although the sculptor, Conal McCabe, called this work merely "Fossil", it is very clearly the depiction of an ammonite. It is made of Cadeby stone and originally stood on a plinth on the ground outside Beveridge House. However, vandals managed to lever the entire sculpture away from its setting, chipping it while doing so. It has now been reset into the side wall of the Baptist Chapel.

Ammonites look like tightly-coiled, flattened snail shells but in fact, were relatives of squids, octopi and cuttlefish. Their thin soft bodies were coiled inside the compartmented shell with the head and tentacles trailing outside as they swam backwards. They lived in the warm shallow seas that covered Barrow between 180 to 200 million years ago. There are many ammonite fossils in Barrow limestone. 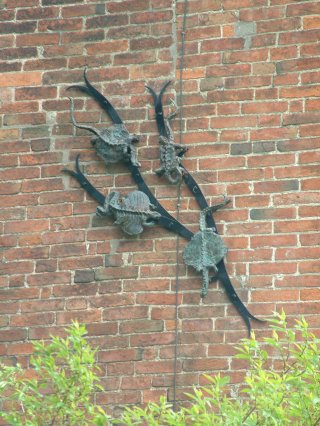 There are four sculptures of lizard-like fossils made in Bronze by Laura Grossner. Originally they were attached separately to the wall to the left of 49, Beveridge Street. They looked as though they were running around on the wall. Sadly,they were stolen and although some were retrieved, Laura very kindly cast some more. They were mounted onto a wrought iron bracket and reattached high up on the side wall of 49, well out of harm's way.

Kuehneosaurus (note the correct biological spelling) was a primitive lizard just under a metre long and with expanded membraneous flaps running down its body. It could probably fly. 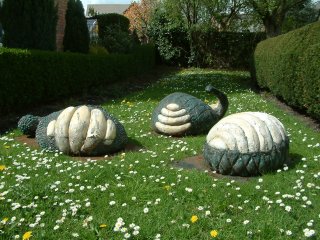 Lying in the grass of the War Memorial garden are three large bodies made by Glenn Webb in cement and resin. They perhaps represent primitive turtle-like animals. Or perhaps giant seeds. Or even pumpkins. Somehow, they do look like life forms of one sort or another. You have to use your imagination to decide what sort. 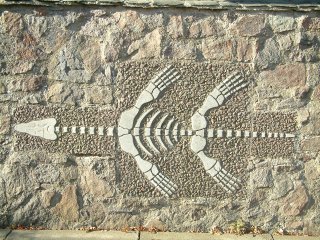 This plaque is not part of the Fossil Sculpture Trail. It was made to celebrate the finding of the very complete remains of a fossilised plesiosaur in 1851 and to mark the coronation of Queen Elizabeth II. The find was in one of Barrow's many lime quarries. Three plaques were made by John Ellis Co. Two were placed on the monument on Jerusalem Island at junction of South Street and High Street. The other is on the club house of Barrow Town Cricket Club, off Nottingham Road.

Plesiosaurs were huge reptiles that lived in the warms seas that covered Barrow between 180 and 200 million years ago. This particular plesiosaur was called Rhomaleosaurus megacephalus. It had a short body, a long neck and four strong flippers used to "row" itself through the water. It probably hunted its prey rather like a killer whale does today.

A life sized model of this find is laid into the floor in Charnwood Museum. It is well worth a visit.

Barrow upon Soar has adopted the Kipper as its village emblem and it features on the Parish Council offices and is used all over the village as well as in many local publications.

From 1840 to 1900 the village must have been a most exciting time for discoveries. Numerous large fossils were found when digging for limestone including more plesiosaurs and ichthyosaurs (fossil fish). Private collections were soon established and many items found their way to the Natural History Museum in Kensington, London, several of which are still on view to the public today. William Lee was the principal collector of Barrow's fossils. He is buried in the churchyard. His collection of the Jurassic fossils was sold on his death with the bulk of the collection going to Dublin Museum.

The original is in the New Walk Museum, Leicester and a replica is in Charnwood Museum, Loughborough. When the fossil was found, it was classified as Plesiosaurus macrocephalus. It has since been reclassified as Rhomaleosaurus megacephalus (meaning ‘strong lizard with a big head’) and is sometimes, also, referred to as a pliosaur because of its short neck and large head. Very confusing.


Previous menu page: A Guided Walk around Barrow, Seagrave, Sileby and Mountsorrel
Next page: A Guide to trees and large shrubs