We gather in large numbers in Industry Square on Remembrance Sunday to remember those who died in two World Wars but for the rest of the year there are no crowds. However In the early twentieth century it must have been the place in the village where public meetings were held. Several contemporary newspaper reports record these events.

LEICESTER DAILY POST JUNE 8TH 1900 PRETORIA
The capture of Pretoria was celebrated with in an enthusiastic manner on Wednesday afternoon. A procession was formed and headed by Barrow Brass Band paraded the streets which were fairly decorated with flags, banners etc. A conspicuous feature of the procession was an effigy of Kruger seated in a carriage and was received en route with groans and ridicule. At various stopping places hearty cheers were given for the Queen, Lord Roberts and Tommy Atkins. Late in the evening a large bonfire was lit in Industry Square and Kruger’s effigy was burnt, the band in the meantime playing the Dead March in Saul. Soon after the crowd dispersed.

LEICESTER DAILY POST SEPTEMBER 6TH 1915. RECRUTING MEETING
An open air meeting under the auspices of the Leicestershire Recruiting Committee was held in Industry Square. The London Caledonian Highland Pipe Band under Lieutenant W J West paraded the village and addresses were given by Mr Lloyd

James, Lieutenant James and Corporal Tilley. The band was entertained at tea by Alderman James Wright of the Cliff.

LOUGHBOROUGH ECHO MAY 31st 1918
On Sunday evening a sacred concert was given by the Prize Silver band assisted by friends from Loughborough in Industry Square, the proceeds being in aid of the Leicester prisoners of war Fund. As there are now some 16 Barrow lads prisoners of war in Germany it was felt that something should be done to raise funds towards defraying the costs of sending at least two parcels for each of the unfortunate lads. It was hoped that a sum of £20 would be realised and as Alderman Goodacre said he had never known Barrow to fail when the object of the appeal was worthy of their support. In thanking Mr Darby and the members of the band he made special reference to the Loughborough friends who had generously come to Mr Darby’s assistance, a remark which was endorsed by the crowd as was the vote of thanks for the band. The amount asked for is well within sight in fact will be exceeded before the appointed time for closing the books.

LEICESTER JOURNAL FRIDAY JANUARY 23rd 1920
Parish Meeting
On Monday evening parish meeting was held in the Church School to decided what steps should be taken in reference to building a permanent war memorial in memory of the 81 men of the village who lost their lives in the war. Mr J T Ball presided over a large attendance and the meeting unanimously decided that a memorial in the form of a monument should be built on a piece of land in Industry Square belonging to Mr Kettle. It was decided to engage an architect to draw up two plans to be submitted to a later meeting. 3 Meanwhile a subscription list was opened- Mr James Wright promising £100, Mr & Mrs C S Thomson £25 each. A number of small amounts were also promised. It was decided that the returned soldiers of the village form a committee and make a house to house collection to raise the necessary funds for the work. 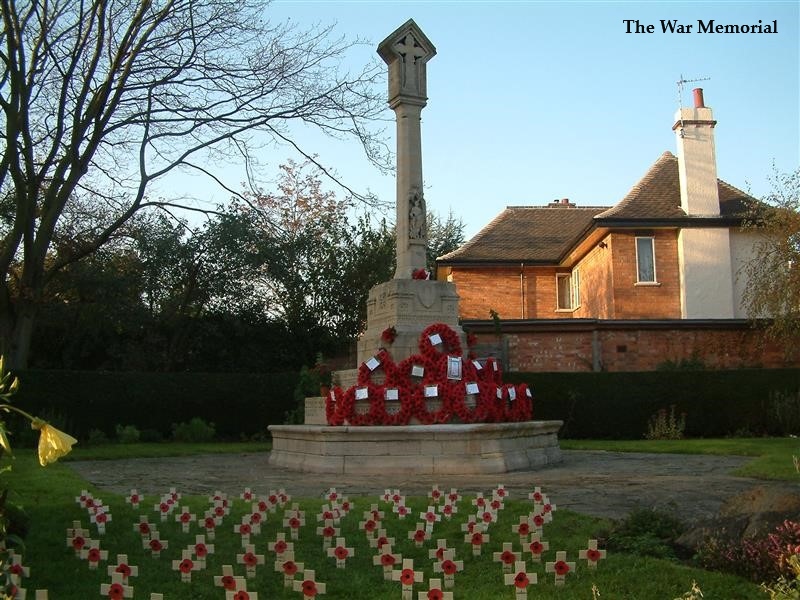 THE WAR MEMORIAL
The War Memorial was unveiled on May 22nd 1921 by Lieutenant Colonel R E Martin. The architect was Mr W D Caroe. Some 2000 people gathered for the ceremony with 200 ex service men under the command of Capt C E Huston drawn up in line behind the memorial. The singing was led by the Silver Prize Band. The Revd Thomas Stone, vicar of Holy Trinity, dedicated the memorial accompanied by the ministers from the Baptist church, and the Wesleyan and Primitive Methodist churches. 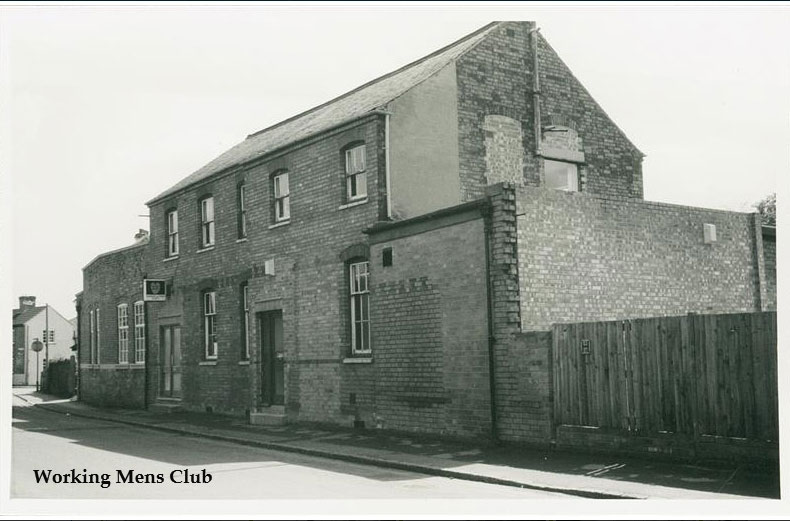 THE WORKING MEN’S CLUB
This was a popular venue for evenings out in the village to enjoy a drink and meet up with friends. It stood on the Warner Street corner of the square. It was demolished in the sixties and eventually replaced by flats. The Working Men's club is just visible on a photo on the village web site.

THE SHOPS
Currently there is only visible evidence of one shop, on the Melton Rd corner of the square. This was Mrs Male’s outfitters shop. Opposite this shop was a fish and chip shop. Near to the Working Men’s club there was a small general shop which is remembered for its ice cream. 4 Photo of Mrs Males shop on this website decorated for coronation .Also some quotes from Mrs Males in Memories section on this web site. Photo of general shop on Remember Barrow. 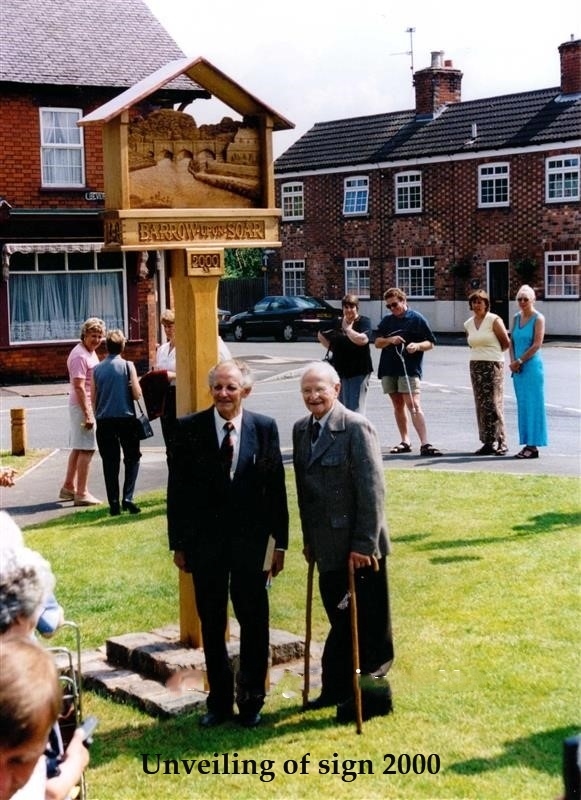 THE MILENNIUM
To mark the new century the Parish Council decided to refurbish Industry Square and commission a new village sign. The old rose bed was removed and a large grassy area was installed. The sign was carved by Tom Rennocks a former resident of the village. On one side it shows the bridge over the Soar and, on the other side, the blacksmith, whose smithy was originally in Beveridge St. A large crowd gathered on a sunny summer day to witness the unveiling of the sign. Photos on the Heritage site