Barrow Census Data—What it tells us

The first complete census was carried out in 1851 when Barrow had 1735 inhabitants; compare that with today when there are nearer 7000.

The first thing the census data tells us is that there were far more young people, up to 20 years old, and far fewer older people over 60, than now. In 1851 young people in Barrow formed a staggering 64% of the population, but older people over 60 formed nly 12%. By 1911, the young still comprised 39%, put the over 60 group had fallen to around 6%.

The graphs also indicate that there were higher numbers of births but higher mortality rates among the younger group until the beginning of the century, probably reflecting the effects on childhood deaths of then common diséases such as diphtheria and tuberculosis.

The census records between 1851 and 1911 show that Barrow was a place where many local trades and employments were to be found, and also shows how these changed and became more diverse over the period.

In 1851, there were five main types of employment in Barrow:

These industries, all requiring hard labour of one type or another, provided work for over one third of Barrow's population. By 1911, many other types of employment had developed.

The biggest source of employment in1851 was framework knitting which, although largely a cottage industry, employed over 19% of the village population:

- Men and older sons who worked the knitting frames to make stockings
- Wives and older daughters who seemed and finished the stockings,
- Younger children who wound the yarn onto bobbins.

Framework knitting as a cottage industry reached a peak in Barrow around 1871, but from then on, with the development of powered hosiery machinery and the growth of the factory system, framework knitting as a cottage industry went into decline with the % population employed dropping to 12% by 1881, 6% by 1891, and less than 2°/o by 1911. However, the coming of the hosiery factory, notably Black & Drivers built around 1885 ¡n Sileby Road, provided alternative employment especially for women, and by the beginning of the 20th century, this factory was employing over 10% of Barrow's population.

In 1851 Barrow was still a largely rural village and there were many farms ¡n the area. Agriculture was the second largest employer after framework knitting. There were 24 farmers identified ¡n the 1851 census employing over 100 agricultural workers on 1250 acres around Barrow.

The types of jobs included labourers who worked the fields, cowmen or stockmen who tended cattle, farm boys and girls who had a host of jobs around the farm, plough men who tilled the land using horses to pull the ploughs, and farm bailiffs at the bigger farms.

Overall the numbers employed represented around 6% of Barrow population, second only to framework knitting in importance. However, farming declined steadily from the 1850's as an employer, and by 1911, although there were still 14 farmers they only employed 30 men or just over l% of the population.

Lime working, the quarrying of limestone from the many delphs around Barrow and burning it to make lime, is Barrow's oldest industrial activity, going back to Roman times. Originally it was a small scale activity carried out by farmers employing small numbers of men to "get" the limestone and then burn it to make lime which was scattered on the fields to improve soil fertility. The burnt lime could also be mixed with sand/silica to form "cement", used for building purposes.
In 1851 there were around 60 men (3.6% of the population) employed in lime working in Barrow but the national boom in construction and house building in the latter half of the l9' century and early 20th century saw the industry grow to employ over 200 people by 1891, equivalent to 9.3°/o population. The main employer was the cement factory of John Ellis & Sons, centred around Hayhill Lane off Sileby Road. Lime, cement and concrete products from there went to towns such as Leicester to meet the demands of the boom in building, as well as further afield to places such as London which used Barrow lime to build the first Tube lines because of its ability to set under water.

The types of job in the lime working industry included quarrymen, labourers who shifted the stone (the most hazardous job in the quarry where wheelbarrows full of limestone were typically wheeled along narrow planks over the deep quarry), kiln hands and lime burners, tramway labourers, limestone miners who worked underground when quarrying became too deep, cement works labourers and concrete slab works operatives.

Limestone quarrying in Barrow ceased in the 1920's, but John Ellis & Sons continued to make concrete products until the 1960's.

Lace making was typically done by wives of limestone workers and was another significant cottage industry in Barrow in the mid 19th century, with over 4% of the population employed ¡n this trade in 1851. However by 1871 lace making had all but disappeared as a homeworking occupation, owing to the development of powered machinery and the growth of lace factories in Loughborough and Nottingham.

This sector comprised a wide array of jobs, including housekeepers, housemaids, cooks, grooms, gardeners, laundresses, footmen, and nurses. Mainly they were employed by the wealthier inhabitants living in Barrow's larger houses, farmers etc. The total employment ¡n such jobs remained surprisingly constant over the period 1851 — 1911 around 80, representing 3.5 to 5 % of the population.

Growth of other types of Employment

From 1881 onwards the pattern of Barrow's employment steadily became more diverse and as noted earlier other major industries notably hosiery rose in importance. One big shift was to factory- based employment, notably Black & Driver's hosiery busíness in Sileby Road which employed over 10% of the population by 1911.
Other trades also grew during this period, such as shoe manufacture, which ¡n 1851 was typically a skilled individual trade, but from 1891 the shoe factory becomes an important employer — e.g. 41 shoe factory operatives are recorded in 1891.

Also building trades - bricklayer, carpenter/joiner, painter — grew from employing less than 20 ¡n 1851 to around 60 by 1901, reflecting the boom in house-building of the late Victorian era.

Clothing trades on the other hand tended to decline during the period, probably again reflecting the growth of competing factories elsewhere. There were dressmakers, glovers, milliners, tailors/drapers and shirt makers, and even straw bonnet makers plying their trades in 1851 with over 35 people working in these trades, but by 1911 this had declined to 8.

Many types of traders and shopkeepers were also found ¡n significant numbers ¡n Barrow; ¡n 1851 there were 7 bakers, 11 butchers and 6 grocers, and by 1901 these figures had all grown - bakers 12, butchers 8, and grocers 12. It is also interesting to see the impact on employment of the railway through Barrow ¡n the period. In 1851 there were just 5 railway employees including a clerk, a guard and 3 labourers, and by 1901 this had expanded to guards, 6 porters, 4 signalmen, 6 labourers and, interestingly, 4 station masters. The railway would also have enabled workers to commute for the first time to places like Loughborough and Leicester.

In summary, the relatively few industries and trades found in 1851 was by the beginning of the 2OlI century giving way to a much wider variety of employments.

The data ¡n the graphs ¡s taken from the Barrow Census records 3nd shows how the main types of employment changed from the first census in 1851to the most recently available census of 1911. 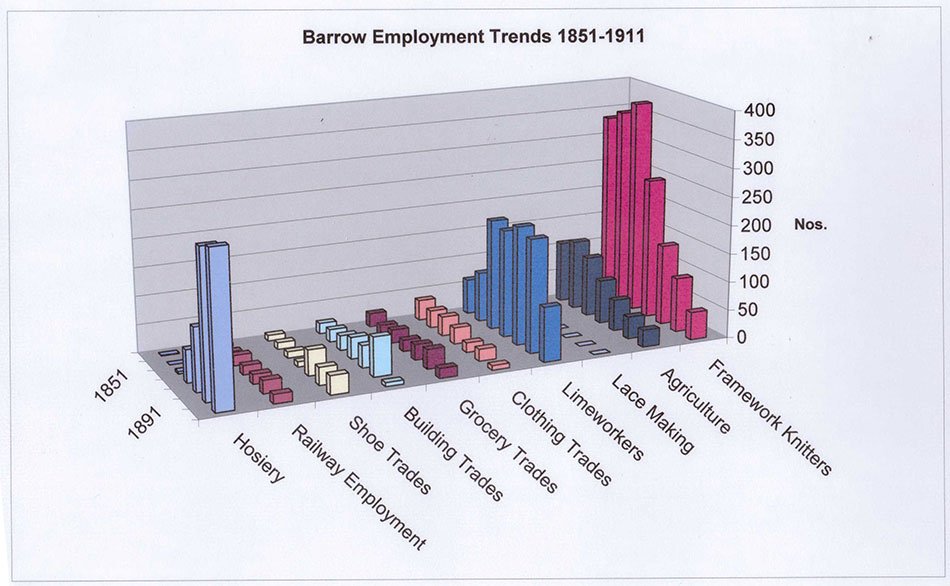 The lime working industry was also a major employer in 1851, but numbers fell after 1901 as a result of increased mechanisation and the development of the Ellis works on Sileby Road. 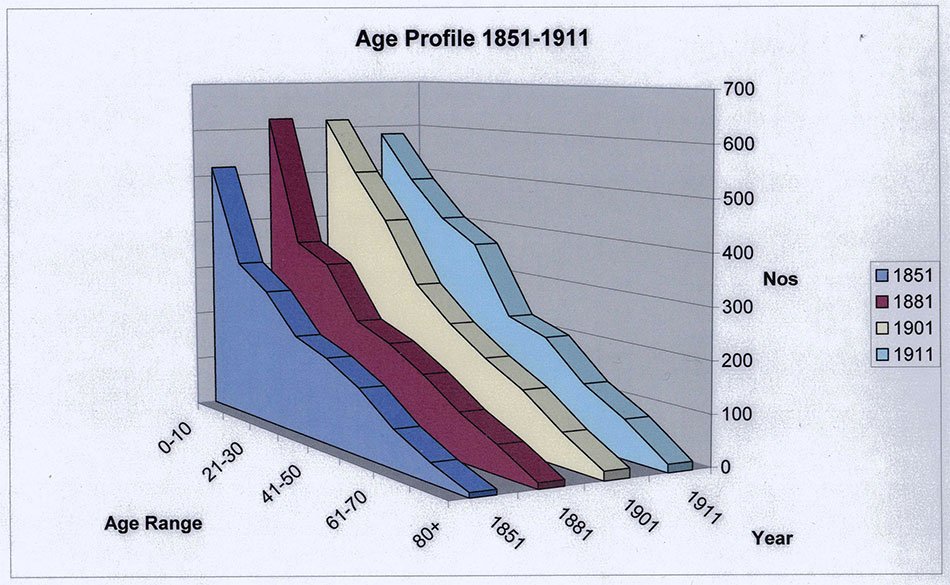 Notice also the Age Profile graph, which shows a very high proportion of children in the middle of the 1gth century but a sharp fall-off with age presumably due to high mortality from diseases such as diphtheria.

There were many more trades, inns and shopkeepers in the Barrow of the mid 19th century. The list below is taken from White's Directory 1846.