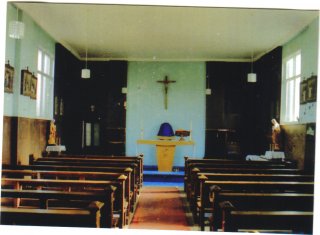 St. Alban's Catholic Church in Barrow was opened in 1839 only ten years after the Catholic Emancipation Act which finally restored to Catholics the right to vote. The land and building materials for the church were given by a Mr. Worswick, whose family later lived at Birstall Hall. The building was done largely by the Irish labourers who, working on the Midland Counties railway, gave their time and skill. The first priest, Fr Norbert Woolfrey, (his brother was a Cistercian monk from Mount Saint Bernard's Abbey) who was, at that time, in charge at St Mary's Loughborough. In 1841 the Rosminians were asked to take charge at St Mary's and so St Alban's became part of their responsibilities. As the assistant priests at Loughborough were changed fairly frequently St Alban's was served by a succession of priests until Fr Albert Bowen was appointed in 1871: he remained there until 1877 and during that time set up a school in the chapel house. The first teacher was Miss Wallace and she was succeeded by Miss Sullivan who became Mrs. Lockwood. Fr Bowen was well remembered because of the children's parties which he organised in the orchard.

In about 1880 the Loughborough curate stopped saying Mass at St Alban's and the parish was looked after by diocesan clergy. One of these was Fr Edward Baste who re-opened the school using the church itself. The children had to pay 2d a week in common with all children at school. At about the same time a Mr France, a Catholic manufacturer with a business in Leicester, who lived in Barrow, gave premises in Quorn to the Blue Sisters (the Little Sisters of Mary). The sisters taught in the school in Barrow for the few years they were there. In about 1880 Bishop Bagshaw came on visitation and confirmed in the Convent chapel. One of the candidates was Lucy Darby, the daughter of John Darby, who lived in the chapel house. Her brother Samuel Darby was organist at St Alban's for fifty years. The same Samuel Darby took charge of the Barrow-on Soar Silver Prize Band and acted as bandmaster until 1926. He was apparently a very good cornet player and was noted for his tact and good humour when dealing with the bandsmen.When the Blue Sisters lived in Quorn the priest was housed there but when they left the priest was briefly resident in Barrow. In 1890 St Alban's was served by a priest from the Cathedral and then later was returned to the Rosminians in Loughborough. One of the priests during this time was Fr. Adalbert Drewe who shortly afterwards was secularised and took a degree of Master of Arts at Victoria University Manchester. He later taught in Canada, the United States and Paris.

Apparently the Barrow parishioners were supporters of Edwin de Lisle of Garendon Hall when he put up for election as the Member of Parliament for Loughborough. From 1900 onwards diocesan clergy were appointed to St. Alban's. One notable priest was Fr. Francis C. Hays who was a great supporter of the Temperance Movement and who travelled extensively to promote the cause, travelling twice round the world for this purpose.

When Fr. Edward Hoare became chaplain to the Rosminian sisters at Loughborough a new arrangement began by which that post was combined with responsibility for the parishes of Barrow and Quorn. As well as being a biblical scholar of some renown he looked after the material care of St Alban's and spent between £80 and £100 on painting and renovation. In his death in 1929 he was replaced by Fr. Herbert Morgan Davies who was responsible for further beautifying the church by the addition of wood panelling. In order to pay for this the congregation raised £150. As a result of the illness and eventual death of Fr. Davies, Fr Aloysius Emery was appointed to St. Alban's and to mark the centenary of the church he published a small booklet "St. Alban's Barrow-upon-Soar 1839-1939 Retrospect. It is from this booklet that much of the information about the history of the church is drawn. He concludes with what he describes as a "prospect", and describes the position of the church as "hidden away behind hay stacks, farm buildings and orchards, it is more of the kind associated with penal times than with Catholic freedom and expansion since Emancipation". He records that a piece of land for a new church had been acquired in 1937 next to the Post Office in the High St. A loan of £200 was taken out to add to the £230 which had already been raised; however the loan was repaid quickly thanks to the efforts of the congregation and to two benefactors who contributed £50 and £100 respectively.

After the war Fr Dennis Horgan was appointed to the parish and with his help and support new efforts were made to raise funds for a new church. A garden party was held at the Chestnuts, the home of Dr Gray in Beveridge St. His daughters organised a dance at the Lib/Lab Club in Industry Square. Fr. Horgan himself contributed to the fund raising by selling bolts of tweed cloth. By this time a new piece of land had been given in North St. Sadly the new church has never been built and the land was eventually sold .The money was put towards the building of the new social centre in Sileby which has been of great benefit to the whole community. The Barrow Catholic community had to accept the closure of their church in 1989. It is now two houses but there is a reminder of its first use as a church. The cracked bell, which called the Catholics to church, still hangs in its original place. The Barrow Catholic community still meet for Mass once a week at the Bishop Beveridge Club and the name of the church is remembered in the small communities to which all Catholics in the village belong.

This short history was originally included in the book published in Barrow to mark the millennium in 2000.

The following is an article which appeared in the Derby Mercury on June 26th 1839.

Opening of a new Roman Catholic Chapel at Barrow on Soar.

On Sunday afternoon se'nnight, this village had the appearance of great bustle, vehicles of every description were in motion, and foot people of every grade , in consequence of the neighbourhood having been placarded announcing the opening of the above Chapel. About four o' clock a procession , consisting of several priests in their robes,&c., with banners and tapers, the contractors of that part of the Midland Counties' Railway, the choristers from Grace Dieu Chapel, with several others, began to move away from Mr worswick's, one of the railway contractors, singing all the way from his house to the Chapel. There were thrice the number of persons that could obtain admission. Nearly the whole of the regular service was chanted, assisted by a seraphine, which was conducted by a Mr Whittaker, after which the Rev N Woolfrey, Catholic priest of Loughborough, preached a sermon, and stated that the chapel was dedicated to St Alban. The contractors before named,at whose expense the Chapel had been built, say it is also their intention to build a house and a school adjoining the Chapel , and to vest the appointment of a master of it with the householders of the parish, and that he is to be appointed without reference to his creed.