Scouting commenced nationally in 1907 by Robert Baden-Powell and spread rapidly world wide. It was not until the late 1920’s that Scouting began in Barrow. A Scout Group was formed and held their meetings in the Church Rooms. However, for unknown reasons the Troop folded but not before a summer camp at Skegness in 1933.

The present Group was formed on April 10th 1935 as Barrow-on-Soar Toc-H Group. The Group consisted of 14 boys in a Cub Pack. Their Leader was Mr. Jack Tatham and the Cubs met at the Toc-H Rooms in North Street. Outdoor meetings were held at a boathouse situated on a strip of land between the railway and the river, an area known then as “The Wilderness”

At the outbreak of the Second World War Mr. Tatham was called up and following a short break the Cubs were led by two Ranger Guides, Jean Sole and Dorothy Jordan (Mrs Wright and Mrs Hudson). 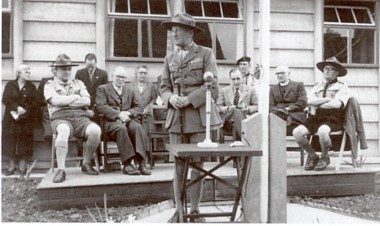 The Opening of the Scout Headquarters by Sir Arthur Curtis in May 1956 - Note the hats and shorts.

Meetings for the Cubs and Scouts were now being held in Cotes Road Infant School and the Church Rooms. In 1947 the Scouts held their first major camp at Belvoir Castle and subsequent early camps at Malvern, Amptill, barton-on-Sea, Barmouth and Penmeanawr.

The first of many fund raising Garden Fetes was held in 1950 at the Old Vicarage, Church Street raising the princely sum of £60. These fetes became the summer highlight of village events and over a 35 year period helped greatly towards the upkeep of Scouting in the village.

As early as 1948 discussions were taking place with regards to the Group building their own meeting place. Various plots of land were looked at including Mill Lane, lodge Hotel stables and eventually the land at Grove Lane was bought at a cost of £300. A prefabricated concrete building was erected and the official opening took place on May 5th 1956.

The Group continued to grow, a Senior Scout Troop and Rover Crew were established for older scouts and young men. The tradition of annual camps was kept alive with some of these taking place in Switzerland and Scandinavia. Several scouts have attended Jamborees. The furthest afield being Canada in 1955 and 1979.

Over the past three decades the Group has continued to grow and adapt to new methods of training by introducing modern activities to attract and inspire youngsters. A Venture Scout Unit replaced the old style Senior and Rover Scouts in 1971. They have built on the traditions of taking part in adventurous, exciting activities fir young people, having travelled extensively throughout Europe and participated at a work camp for earthquake victims in Greece in 1987.Twenty three members of the Group have attained the Queen Scout Award, the first in 1952 and the latest in 1990.

A Beaver Colony for 6 – 8 year olds was formed in 1988 to give the opportunity for younger boys to enjoy the fun and friendship offered by Scouting.

Many people in Barrow will have fond memories of being involved in Bob-a-Job Week, Garden Fetes, Gang Shows, Camps, waste paper collecting, Parades, etc. Although some of these events no longer take place, the distinctive black and old gold neckerchief is still to be seen at many events in the village and the surrounding area. 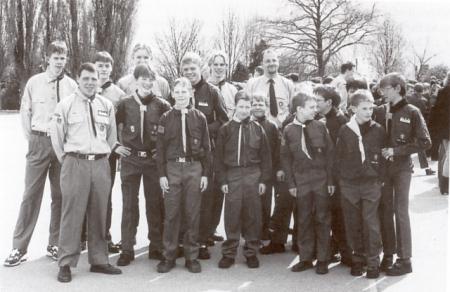 The Scouts of the Nineties - Note no hats and no shorts.

From those early tentative beginnings in 1935 one constant has remained – the Cub Pack. It still attracts the young lads of the village and gives them the opportunity to take part in many outdoor activities and camps in the county and beyond.

The future looks bright for scouting. The Headquarters continues to be improved and modernised thanks to a hardworking committee. The Beavers, Cubs, Scouts and Venture Scouts are supported by high quality voluntary leaders, as they have been throughout the past 60 plus years and many other people in the community.

In the words of the Scout Motto the Group will “Be prepared” for the new millennium.