The Origins of Barrow

The village of Barrow-upon-Soar has had several differing names in its long past. It has been known as Barogh-on-Sore, Barow, Barewe-uponSore, Baro, Barrough and the entry in the Domesday Book is that of Barhoo, which is the derivation of the word ‘Barrow' meaning a burial place.

It is virtually impossible to identify exactly who would be the first inhabitants of the village, but it could well have been the Druids who came along the Great Salt Way, which is one of the oldest roads in England, Pawdy Lane leading on to Six Hills being part of this road. The Romans most certainly came to Barrow. Whether they fortified the village is a matter for conjecture – the high ground and the river would have made it suitable for a defensive position – however the finding of Roman remains gives positive proof that some kind of settlement was erected.

In 1867 and 1874 the remains of a Roman cemetery were found adjacent to Sileby Road. The remnants contained skeletons, urns, glass vessels and other burial relics, all of these items came to light when workmen were digging for limestone in that area. The first area discovered measured ten feet by six feet and had a base made of granite rubble possibly from Mountsorrel. This is thought to have been a funeral pyre. The discovery made seven years later was oval in shape measuring 15 feet by 12 feet. Again vessels, lamps and skeletons were found, suggesting another cemetery. From these finds it could be possible that further Roman remains are still to be discovered in the vicinity. The two discoveries made in the 19th century are the most important of their kind to have been found in Leicestershire and many of the items are housed in Leicester Museum.

From 1840 to 1900 the village must have been a most exciting time for discoveries. Numerous large fossils were found when digging for limestone, not only was the famous ‘Kipper' unearthed but many others of equal merit were also found. Private collections were soon established and many items found their way to the Natural History Museum in Kensington, London, several of which are on view to the public at the time of writing. 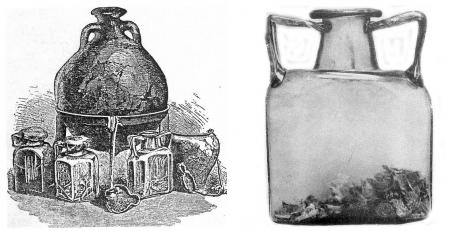