The Art of Knitting

Most women learn how to knit and for many of them it is an absorbing and enjoyable occupation which results in individually styled garments for the family to wear. Hand knitting is supplemented by an extensive industry producing a wide range of knitted garments, and it is with the development of the machine knitting industry that this book is concerned.
Knitted fabric differs from woven fabric in that it does not have a separate warp and weft but is composed of a regular series of interlocking loops made from one continuous thread. This gives it a much greater elasticity than woven fabric, so that it moulds more readily to the shape of the human body and is therefore particularly useful for closely fitting garments such as stockings, socks and vests. It is, however, not easy to make good knitted fabric; the yarn has to be even and well twisted, with no thin places which could result in a broken thread, while the loops need to be of the same size and locked together. A broken thread or dropped loop can result in the whole garment unravelling.
It is perhaps for these reasons that woven fabric seems to have been made earlier than knitted fabric, despite the need for a piece of fixed equipment such as a loom. The first kind of knitting was probably similar to the French knitting that children still do using pins stuck into a cotton reel. Loops were formed round pegs stuck into a rectangular or circular frame and then a second series of loops was wound round. The first series could be drawn over the second series by the fingers or a hooked implement like a crochet hook. This method produces a tube of -fabric similar to that made using three or four needles, which seems to have been the way in which knitting with straight needles developed. Certainly by the fifteenth century caps and stockings were being made in Britain using needles rather than a peg frame.
In hand knitting one needle is kept rigid and holds the knitting previously completed, while new loops are created and drawn through the loops on the rigid needle by a second needle which is moved to and fro. The first knitting machine or stocking frame, invented about 1589 by William Lee, was based upon the principle of a fixed needle with a second moving one which formed the loops and drew them through the set of loops last made. As with other inventions for textile manufacture, such as the spinning jenny, Lee was concerned to replace the one implement wielded by the hand worker. 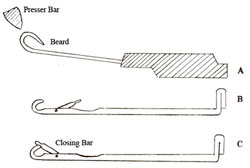 A bearded needle (A) with the pointed end bent into a loop which can be closed by means of the presser bar. On the latch needle (B and C) the hinged pin closes the loop when it is pushed across by the yarn travelling up the stem of the needle. 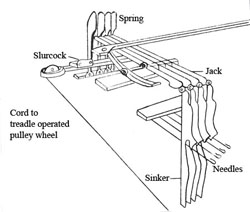 Part of the knitting frame mechanism. The cord from the pulley wheel moves the slurcock along a bar, which pushes the springs backwards. The jacks, which are pivoted in the centre, are thus released and allow the sinkers to drop between the needles.

-in this case a needle – by a number of them so that the fabric could be produced more quickly. The rigid needles in Lee's machine had long stems with the pointed ends bent backwards into hooks. This bearded needle was his solution to the problem of drawing, a new loop of yarn through loops previously made without dropping them. The beard or hooked part of the needle could be pressed into a groove in the stem of the needle, so enclosing a row of new loops. The old loops supporting the fabric already knitted could be drawn forward over the closed beard so that they slipped down to hang on the new loops contained in the beard. This type of needle continued to be used in machine knitting until it was partly superseded by the latch needle, similar to a rug hook, during the nineteenth century.
Lee's equivalent of the moving needle which made and transferred the loops was small metal plates, called sinkers, hanging vertically between the needles. These were attached at the top to levers or jacks, which were pivoted in the centre. The weight of the sinkers would tilt the jacks, and so the free end of each jack was held in position by a notched spring. A locker bar kept them all in place, but they were released when required by a small piece of metal, the slurcock, which travelled along a bar underneath the springs and released each jack one by one. The slurcock was controlled by a cord passing round a central pulley and could be made to move left or right by the two outer treadles on the machine. A thread was laid across the stems of the needles and by means of one of the treadles the jacks were released and the jack sinkers fell one by one between every two needles and so made the loops in sequence, pulling in extra thread from the free end If all the jack sinkers came down at once, the strain would have been too great on the thread and it would be broken. The loops were even because the jack sinkers were carefully adjusted so that each came down exactly the same distance. Lee's original machine could produce only a coarse fabric, but his brother later added a second series of sinkers, the lead sinkers, which were fixed to a bar and came down all at once between the jack sinkers, forming a loop over every needle, and so
creating a finer fabric than could be produced on the original machine. The sinkers were carefully shaped to perform a second task, that of pushing the loops backwards and forwards on the stem of the needle, and so they were in every way the equivalent of the hand knitter's moving needle.
The sequence of working a stocking frame can be followed by means of the diagrams. The knitter first lays a thread across the stems of the needles, either by hand or with a mechanical device known as a thread carrier (A). Pressing down one of the outer treadles with his foot, he releases the slurcock and so causes the jack sinkers to fall one by one between every two needles to form the loops (B). He then pushes with both hands on the thumb plates at each end of the carriage and releases the sinker bar, bringing down the lead sinkers to divide the loops already made : the jack sinkers rise slightly at the same time to equalise the loops©. With his hands the knitter then pulls forward the carriage so that the sinkers push the new loops forward under the needle beards, the old loops being held under the arches of the sinkers (D). The carriage is then lifted to remove the 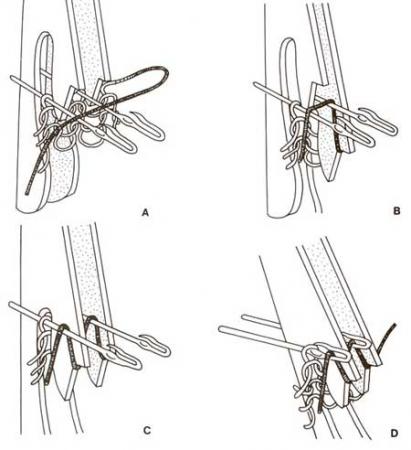 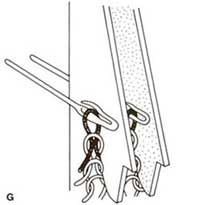 sinkers from between the needles. The knitter then depresses the central treadle with his foot, thus bringing a presser bar down on the needle beards and closing them (E). The carriage is then pulled forward so that the long jack sinkers push the old loops on to the needle beards. He then removes his foot from the middle treadle to release the presser bar and pulls the carriage fully forwards to knock the old loops over the closed beards so that they slip off and hang over the new loops inside the needle beards (F). Using one of the outer treadles, the knitter releases the jacks again so that the arches of the sinkers can take the fabric back up the stems of the needles as the carriage is pushed backwards (G). When the jacks are raised again, another row of loops can be made and the sequence repeated.

Working the stocking frame required considerable physical effort, both from the hands and arms in moving the carriage and from the feet and legs in working the treadles. Good sight was also needed as the machine required frequent adjustment. It could only produce a flat piece of material, not a tube of fabric, but by increasing or decreasing the number of loops made it was possible to widen or narrow the fabric to follow, for example, the shape of the leg. This was then taken off the frame and seamed up, forming a fully fashioned stocking. Women usually undertook the seaming, while because of the strenuous exertion required working the frame was usually the man's job. Children or women wound the thread from hanks on to bobbins. Framework, knitting, as it came to be called, was therefore an occupation in which all the family participated and one which could be carried out at home since only muscle power was needed.