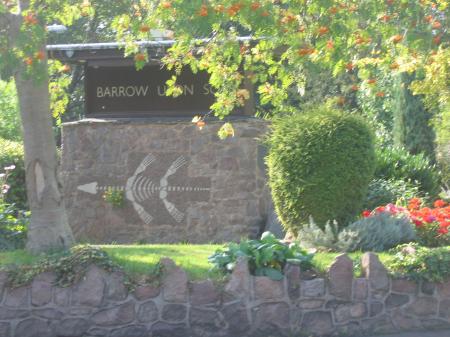 The Plesiosaur fossil (originally named Plesiosaurus macrocephalus) was found in Barrow upon Soar in 1851. Workmen digging in a lime pit near the village unearthed the four-metre reptile. Village heritage warden Arthur Gardner said It was an extraordinary find. This prehistoric marine reptile lived approximately 150-200 million years ago and was common in Leicestershire. Nicknamed ‘The Kipper' the skeleton which was almost complete, was of a reptile which lived rather like a killer whale in warm seas which used to cover this whole area. It looked a bit like the supposed Loch Ness monster. The Kipper mosaic was designed by the then head teacher of Humphrey Perkins High School. Three copies were made by John Ellis Co. to mark the coronation of Queen Elizabeth II. Two are on on the traffic island, known as ‘Jerusalem' at the bottom of the High Street and the other is at Barrow Cricket Club. Barrow upon Soar has adopted the Kipper as its village emblem and it features on the Parish Council offices and is used all over the village as well as in many local publications.

From 1840 to 1900 the village must have been a most exciting time for discoveries. Numerous large fossils were found when digging for limestone. Private collections were soon established and many items found their way to the Natural History Museum in Kensington, London, several of which are still on view to the public today. William Lee was the principal collector of Barrow's fossils. He is buried in the churchyard. His collection of the Jurassic fossils was sold on his death with the bulk of the collection going to Dublin Museum.

The original is in the New Walk Museum, Leicester and a replica is in Charnwood Museum, Loughborough. When the fossil was found, it was classified as Plesiosaurus macrocephalus. It has since been reclassified as Rhomaleosaurus megacephalus (meaning ‘strong lizard with a big head’) and is sometimes, also, referred to as a pliosaur because of its short neck and large head. Very confusing. For more information, see www.plesiosaur.com