A Guided Walk to Swithland Reservoir

An interesting walk taking in the river, woods and footpaths from Barrow upon Soar, via Mountsorrel, Swithland reservoir,

Buddon Brook path and Quorn, returning to Barrow upon Soar.

Directions begin at the village car park, adjacent to the Three Crowns Inn, at the corner of Cotes Road and North Street, where you will find ample free parking. 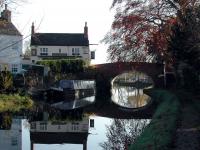 B) The Navigation Inn

From the car park turn right, along High Street to Jerusalem roundabout; turn left on to South Street and then turn right on to Mill Lane and down the hill to The Navigation public house. Cross over the canal bridge and take the track on the left through “Barrow Boating” and on to the footpath which crosses the weir.

The canal came to Barrow upon Soar in 1794 and the Barrow Weirs were built at the same time, showing clearly that there must have been a natural waterfall of some kind here before. Floods have always been a part of Barrow life and, although greatly improved in recent years, they can still cause problems. 1912 saw the highest floodwater for a hundred years and the old brick horse-bridge over the weir was swept away by floods in March 1971.

In 1860, a railway branch line was constructed to take rock from the quarries around the village. This was a condition of allowing the Great Central Railway to be built on land belonging to local landowners and by 1863 the line was carrying 200 tons of granite per day. The 1860 bridge now bears the conveyor which transports rock from the quarry to the works at Barrow upon Soar. 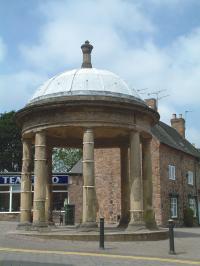 Memorial Park (The Peace Garden), turning left into the Market Place. Turn right by the Butter Market, which replaced the old Market Cross in 1793, into Watling Street. After about 20 yards take the signposted footpath which runs between the houses on the left. (No’s 3 & 5.) Follow the path up Castle Hill, the site of a now destroyed Norman Castle, ignoring a stepped footpath to the left.

The origin of the name Mountsorrel is, according to one legend, the place where a devil named Bell mounted his sorrel horse before going in “one leap” to a village now called Wanlip; in another leap to land where he burst his girths [Birstall]; and fi nally in a third leap to a place where he was finally buried - Bell’s grave i.e. Belgrave).

A more mundane explanation is that there was a Norman Castle here called Montsoreau or Mont Sorel. Another possibility is that it is a corruption of the French phrase meaning “sorrel coloured hill”- (after the colour of the rock here. We don’t know for certain which, if any, of these suggestions are correct.

The castle is reputed to have been built in 1080 by Hugh Lupus, Earl of Chester and nephew of William the Conqueror. This was a prime and the castle held a dominant position overlooking important Soar Valley.

Access was by a winding path north. Holding such a strategically important position, comparatively short history of Castle records it being involvedin many struggles of national importance. One of the most signifi cant was what has been called the fi rst English Civil War, between the competing royal claims of King Stephen and the Empress Matilda.

Passing the beacon on your right, continue over the crest of the hill, then bear slightly right on to a road. Turn right and then left along Cufflins Pit Lane, which is signposted “Leicester Round” (a long distance trail). Follow the track uphill keeping the old quarry fence on your right. At the end of the track keep straight on along the road and over an old railway bridge.

The quarrying of granite in Mountsorrel dates back to Roman times, when it was used for local buildings. However, much of this was taken from hills and the open countryside rather than being deliberately quarried. Mountsorrel granite is actually “granodiorite” which is a little darker than true granite.

From the 18th century, granite chippings from Mountsorrel were used for surfacing the majority of local roads and it was around this time that quarrying began in earnest. This was largely due to the then quarry owner and Lord of the Manor Sir John Danvers who, in 1758, won contracts from the Harborough to Loughborough turnpike for road surfacing. The irony of this success was that the weight of transporting the quarried granite badly damaged the roads around Mountsorrel itself. This problem was only solved when granite transport moved from the roads to the newly constructed canal in 1794.

Turn left at the T-junction at the end of the road and then right on to Kinchley Lane, following the road to the right at the bottom and alongside the reservoir.

Swithland Reservoir was built between 1894 and 1896 by damming Buddon Brook. It is linked to Cropston Reservoir and supplies water to the City of Leicester.

Cross the dam, noting the Victorian Monumental” style of water treatment buildings to the right. Follow the road to the left at the other side of the water towards the Great Railway line. 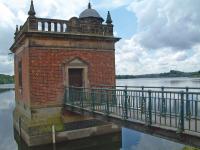 Do not cross over the railway bridge but take the footpath to the right, keeping the railway on your left. The footpath bears right after about 200 yards, following the edge of a wood on the right. It is then very clearly routed over a stile and wooden bridge and then between a hedge and fence which mark a field boundary. At the end of this fenced section cross over a stile and follow the signs and a well worn path. Then join a farm track which will bring you out on to Chaveney Road in Quorn.

In 1893, the Manchester, Sheffield and Lincolnshire Railway received the Royal Assent for the construction of the new mainline from Annesley, 12 miles north of Nottingham, to London Marylebone. The line opened for coal traffic in July 1898. The following March, the Great Central Railway ran its first passenger train from Marylebone Station, and soon lived up to its slogan, `Rapid Travel in Luxury’. However, the motor car began to have a serious effect on the railways in the 1950’s and long stretches of the line were closed in 1966.

Today, the Great Central Railway is one of the few railways in the world where scheduled full size steam trains pass in motion on a double track.In 1969, a group of enthusiasts decided to recreate for future generations the magic and nostalgia of the great British age of steam. Eventually it is hoped to link Nottingham and Leicester.

Turn right on to Chaveney Road, first left on to Elms Drive, and then first right on to Cradock Drive. At the end of Cradock Drive, carry straight on down a signed bridleway/footpath. The footpath ends on Sanders Road. Turn left, then immediately right, and follow a footpath to High Street. Cross over High Street; turn right, past Rawlins School then left into Church Lane. Keep straight on, passing the Church on your left, and exit from the churchyard on to Station Road, turning left. Continue forward, passing Stoop Lane and the Apple Tree public house on your right hand side.

Meynell Road was named after Hugo Meynell who, in the 1770s, set up and was master of the very first of the modern lowland hunts - the Quorn Hunt. Since then it has universally been considered the flagship hunt of the country, largest of the Shire Hunts.

Keep straight down Huntsman’s Close and then along an unsigned footpath which takes you over the bridge crossing the Quorn/Mountsorrel bypass and then over the ‘Slabs’, (created to give easy access from Quorn Hall to Barrow Railway Station) to Barrow upon Soar arriving at the road. Turn right and walk over the river bridge and up Bridge Street, passing the Soar Bridge Inn on your right. At the Jerusalem roundabout, turn left on to High Street and return to your starting point at the village car park on the corner of Cotes Road.


Previous menu page: A Guilded Walk to Miller's Bridge
Next page: A Guided Walk around Barrow, Seagrave, Sileby and Mountsorrel