MEMORIES OF GROWING UP IN MELTON ROAD

I was born on September 24th 1952 at home, number 133, Melton Rd. Barrow on Soar. My parents were Edward Bernard Webster and his wife Betty (née Barnes)

At that time Melton Rd ended at the bridge with Fishpool Brook continuing on as Pawdy Lane towards Six Hills with isolated farms and bungalows. Bert and Tina Hollis lived with their children Mary and Steven at 137(the last house on our side). Rose Briggs lived next door at 135, a lovely lady and very religious, a chorister at Holy Trinity for many years. Then there was us Mum, Dad, Me and on January 28th 1955 m brother Philip was born. We lived at 133 until 1971 when we sold to a couple of teachers, Theo and Sue. The other side of our semi detached house was a lady and her spinster daughter “ Auntie Lizzie” and Doris, after Doris retired and Lizzie died she moved to a council flat and 131 was sold to a chap and his wife, Ralph and Beryl, Ralph was a car mechanic , later a hosiery mechanic who had done his national service in the REME ( Royal electrical and mechanical engineers)He could take a car to pieces , recondition it and make it run like brand new , which he often did buying a wreck and making a magical transformation , alas he moved to Shepshed before I got into car owning- how useful he could have been to me.

Moving up the road. Number 129 was the home of Jack and Nellie Lord, at number 125 was the Woodhouse family, 123 the Watts family, Rosemary the daughter used to baby sit me when I was a baby, 121 brings us to Jim Dudley and his parents: Ernie and his wife, 117 the Harris household, two bachelor brothers, 119 was Dick Morley’s house with his wife and racing pigeons! 115 the detached house was owned by Stan and Nina Betts and their son Paul.

Then came the bungalow which belonged to Ruby Wallwork, her husband and daughter which brings us to New St corner. This was our end of Melton Rd.

Moving over the road _ Mind the traffic there might be a car coming by in the next hour or so!

Opposite New St is the large bungalow built by Gordon Perkins for him, his wife Doris and two sons. Next are two smaller bungalows and two houses, then the large detached house where Mr & Mrs Chambers and their two sons lived.

Next is another bungalow originally I remember an Italian couple, Santi and Rosa living there. They moved and Nancy and Stan Wilkinson bought the bungalow: Nancy worked at Simpkin and James in Loughborough (quality grocers) and latterly for my dad at Webster and Barnes .Next the market garden, or Hicklings, George and his wife Nellie lived there, their sons had left by the time I used to visit but I remember his round fish pond full of goldfish and Koi Carp. Next was the Big House and paddock owned by Eric and Ada Moss, as a child I remember their youngest son Frank still lived with them, the other children were married and living independently , the nearest being Win married to Bert Burton . Ada Moss was Jack Illston’s daughter and the Moss’s paddock and the Burton children were my excellent playmates, what fun we had!

Mother’s rule: the perimeters are the Brook and New St. Anywhere in between fair game but be home for tea! This all changed when Jelsons bought Highfields farm and Babington Road, The Banks, Highfields became our new playgrounds.

Can you transport yourself' back half a century? if you are not old enough to remember, try to imagine what would have been like for the people Barrow between the World Wars.

There were two main occupations for the men. The Delph Quarry and the Lime Works on Sileby Road, both requiring strength and stamina. Before the recent estates were built, therefore, Barrow was essentially a working village not unlike the mining villages of popular fiction, and the people took their leisure as wholeheartedly as their work. 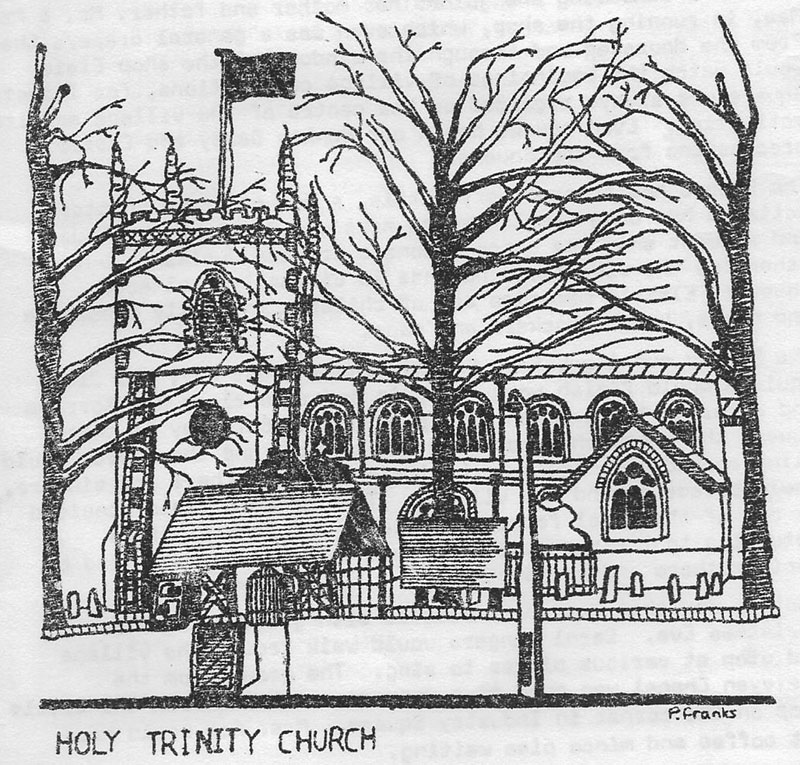 Elsie Male who runs the general draper’s shop in Industry Square was born in barrow and has in Industry Square all her life. After her schooling she joined her mother and father Mr & Mrs Mee, in running the shop, which was a general drapers then. From the doorstep and through the windows of the shop Elsie would watch the beginnings of village celebrations, for Industry Square was always regarded as the centre of the village and its activities. Even now we begin our Donkey Derby and Easter processions from the Square.

The Square has changed very little, a row of frame knitters cottages has been demolished to make way for modern house and a sweet shop has become a private dwelling, but otherwise the view Elsie now has is virtually unaltered, however, Elsie’s memories are of children in frilly pinafores and boots, knickerbockers and caps.

The Friday evening before Sunday School treat day, Mr Jim Squires would finish work early in order to clean his lorries and decorate them. Then at 1 pm, on the Saturday in the Square the young children from the chapels and the church would climb aboard and, followed by their older brothers and sisters, would parade around the village. Then on to a field provided by one the local farmers for games and sports before returning to their respective churches for a tea provided by their mothers and grandmothers.

Another day that Mrs Male recalls with great delight is Christmas Eve. Carol singers would walk around the village and stop at various places to sing. The group from the Wesleyan Chapel was sure of a very warm welcome from this little shop on the corner In Industry Square, Mrs. Mee would have hot coffee and mince pies waiting.

The singers would be accompanied by the Barrow Silver Band, transported in charabanc, provided by Elsie’s uncle, Mr. Fred Harris, and would continue around the village until the early hours of Christmas morning.

A very important festival for the village would be the weekend of Barrow Wakes. This lasted from Friday through to Monday and celebrated the Patronal Festival of the Church. The festival dates back to the opening of the church and was always a time for “feasting and merrymaking”. Originally the churchyard and neighbouring streets would have held roundabouts, swings, stalls and shows, but Elsie can remember celebrating starting from the Square.

This July, with the shops and many houses decorated for the Royal Wedding, one could not help feeling a little sad that we no longer have many local occasions and events to bring the bunting to the windows and happy children into the streets.